Multi-currency ensures your sales team can collaborate effectively and report with confidence, no matter how many countries you sell in. With multi-currency:

How to set User Currency

Each user can set their individual default currency in My Profile. All deal totals and reports are displayed in this currency on their user login account.

When you create a new deal, the value for the deal defaults to your User Currency. You can select available currencies for the deal amount on the new deal form.

To specify the currency for an existing deal on the individual profile page, select Edit Deal on the top right portion of the screen and then select the currency from the drop-down next to Amount. 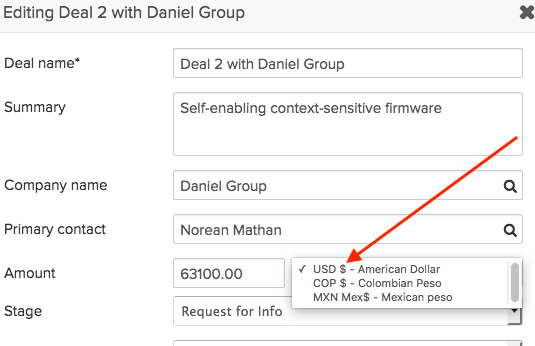 How to import deals with multiple currencies

In order to import deals with multiple currencies, you must add a currency column to the list that you import. The currencies that you import must be identical to the Active Currencies that are available for your account. For example, if the amount needed to be imported as a Mexican Peso, your Currency column would need to use the 3-digit ISO alphabetic code ‘MXN’ for that particular deal.

If you import a list of deals and you do not include a currency column, then the currency for the imported deals will be set as the account currency.

Where will deal values be converted to one currency?

The Home tab, Filtered Totals, Sales Pipeline Total, and Deal reports will all report on the total amount in the Currency that has been specified for the user. The currency conversion rates are accurate as of the last thirty minutes.

NOTE: won deal reports are converted in real-time to their most up-to-date amount, not at the conversion rate from the time-of-close. If you wish to record the conversion value at the time of close, we suggest that you create a deal custom field to record this value.

What currency is used for Currency custom field?
All deal fields are in the default Account Currency set in the Account settings, including custom fields.

Where is the multi-currency value determined from?
https://openexchangerates.org

How do I add a currency option to the drop-down? I do not see the one I need listed.
Deals can be added in any currency as long as the currency has been marked as “active” by the account Admin in Accounts Settings.

Do I need to alter my custom fields on a Multi-Currency deal?
All deal fields are in the deal’s currency including custom fields.