Track and follow your customer’s lifecycle through your company’s unique sales and post-sales process using multiple pipelines! Multiple pipelines are designed for accounts with multiple products and services that go through different sales processes with multiple phases. Once the sales team has closed a deal, they can pass the opportunity to the post-sales pipeline and build that relationship to increase revenue without skipping a beat.

An account can have up to 5 pipelines depending on subscription (1 with Start, 2 with Develop, and 5 with Grow). All deals must be in a pipeline and all deal stage names must be unique. Every account will have a default pipeline, that can be changed at any time. New deals will be automatically added to the default pipeline unless a user selects a different pipeline.

Users are able to add new deals and copy or move existing deals to any pipeline and stage. Copying deals preserve historical reporting on the original record that allows for a seamless handoff from the sales team to the post-sales team!

The Dashboard displays each stage in the pipeline and its stats. Toggle between active and deals expected to close by timeframe and pipeline. Build a list report based on the dashboard's filters by clicking on a deal stage.

Select records individually or in bulk to change its current stage and/or pipeline.

In order to properly account for revenue and report accurate statistics, deals can only be in one pipeline at a time. Copy or move select records to a different pipeline and/or stage in bulk from the deals listview.

Associate to a pipeline

Check the box to select the deal(s) then Set pipeline/stage or select the Pipeline field box to change the pipeline. 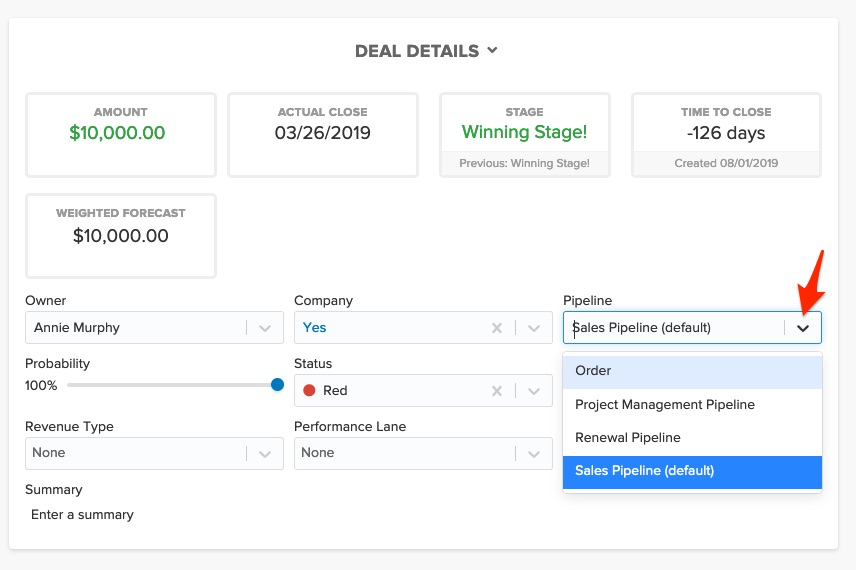 Import
Use the system Stage field to import new or update existing deals to its associated pipeline. 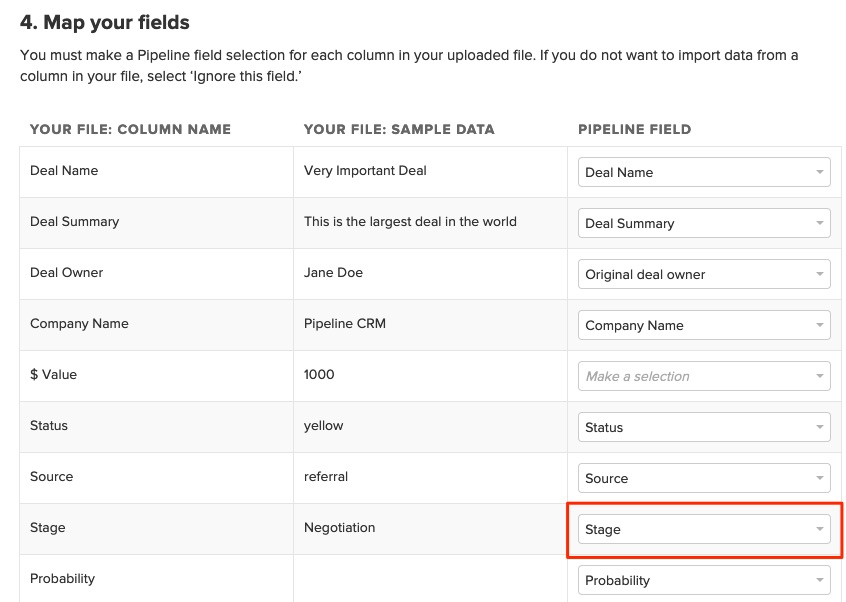 Copy
A deal cannot be tracked or reported on in multiple pipelines at the same time. Copy a deal if you would like to keep a record of the deal in its current pipeline and add a copy of it to a different pipeline to continue through your post-sales process. The original deal owner will be credited for closing the deal for reporting purposes.

Copying is ideal for when a deal has finished going through a pipeline and is either in the won or lost stage and you’d like for it to become part of another pipeline. This will assure that the revenue and stats will be correctly accounted for in the original pipeline while the copy of this deal can move through a different pipeline but have all the same information attached to it.

In order to properly account for revenue and report accurate statistics, deals can only be in one pipeline at a time. Filter on any combination of or on all pipelines.

Deals can be imported directly into the desired pipeline by using the Stage system field. This is why all stage names must be unique regardless of pipeline. The stage name on a .csv or Excel file is used to add the deal to the correct pipeline. If a stage isn't identified then the deal will land in the account's default pipeline.

When updating existing deal records by import an activity note is created to show which pipeline the deal was moved from.

Define your pipelines and stages from the Pipelines & Stages page in account settings. Place your cursor over the pipeline name to set it as the default pipeline for all users. Edit its name, stages, and probabilities, or delete it altogether.

When deleting a pipeline you’ll be prompted to choose a pipeline and a stage to reassign all active deals on. All closed (won/lost) deals will be moved to the corresponding stage in that pipeline as well.

Deal stage names must be unique across all pipelines. Deal Loss Reasons are configured on its own page and are associated with “lost” deals regardless of pipeline. 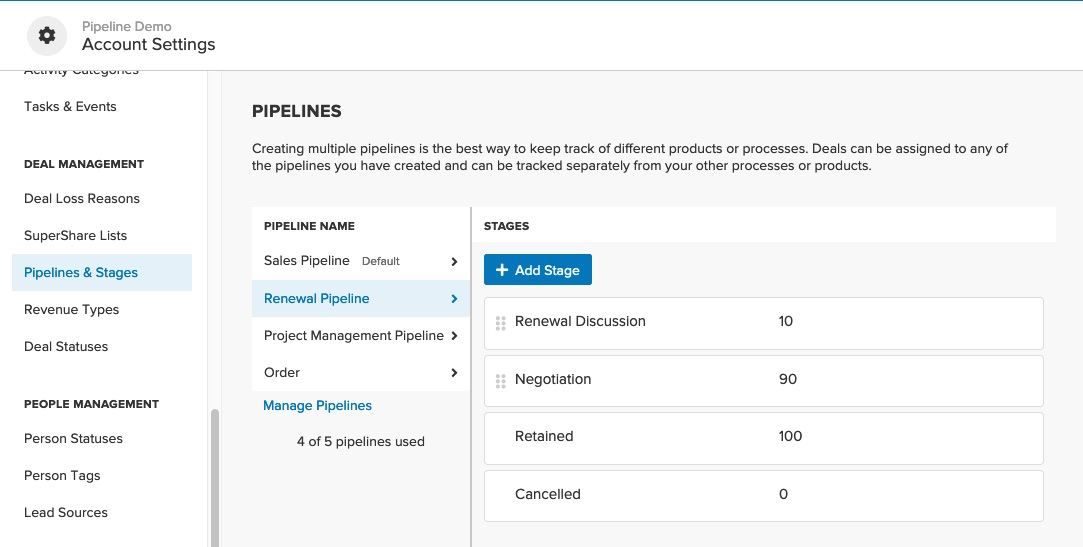 Why can’t I have a “won” for each pipeline?
Deal stage names must be unique across all pipelines. By default, the system will add a numeral at the end of “won” and “lost” stages [won(1) and lost(1)] when a new pipeline is added.

If I import deals that are not yet in a stage, in which pipeline will they land?
Deals imported without an identified stage will land in the account’s default pipeline.