Manage which records team members have visibility of using team management. Teams allow admins to restrict or allow user visibility to certain records based on the owner field for all users on a team. Team-to-team reporting creates a hierarchy for increased record visibility for Team Leaders to manage multiple teams.

Teams consist of non-executive users and can have multiple Leaders and Read-only access users as well. Click on a team’s name on the organization chart to open the team’s settings page.

A new or existing user can be added or moved to a team by clicking Add new user or Add existing user then Move in the Team Settings. Users moved will retain ownership of all records but may remove their visibility to their previous team’s data.

Reports to allow teams to report to other teams to preserve multi-level hierarchy.

Visibility settings control which records team members can see and edit; whether its deals, companies or people. Visibility is controlled at the team level allowing collaboration among team leaders and members. Refer to the Pipeline Knowledge Base article if you’re using Company Ownership. 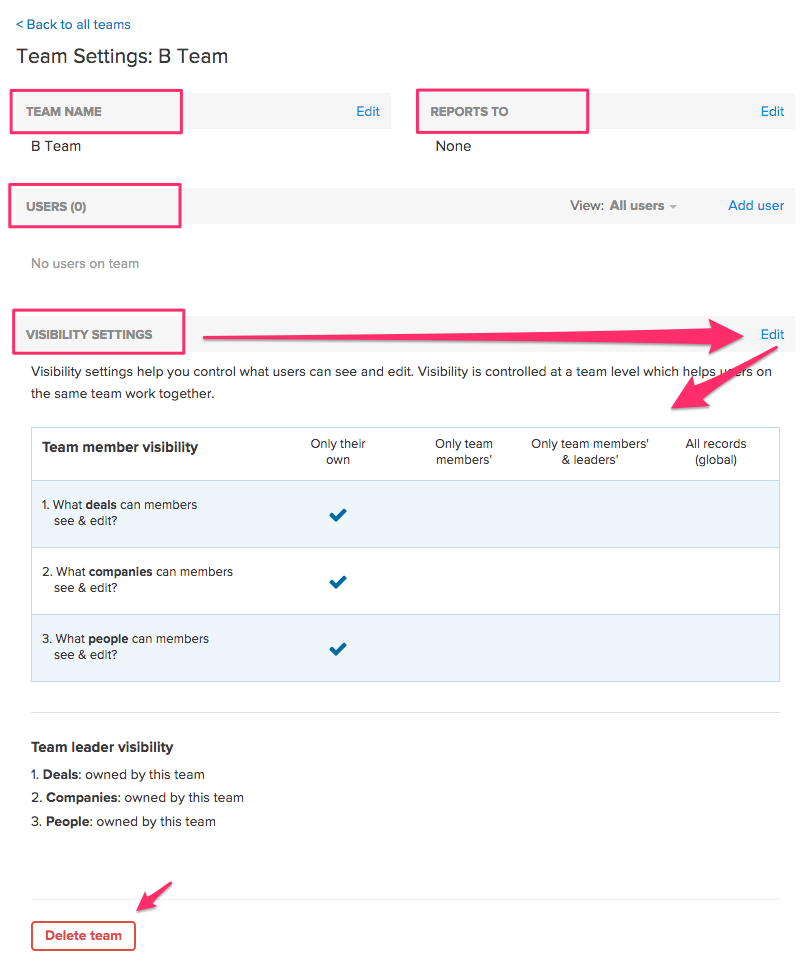 Create a team hierarchy using 'Reports to' and take advantage of the team to team reporting. Team Leaders already have visibility to their Team Members' records. Leader's visibility extends to the teams that report up, creating user team hierarchy. This allows Team Leaders to effectively manage multiple teams with increased visibility.

Below is a diagram of the team to team reporting, where both the "Atlantic" and "Pacific" teams report to the "National" sales teams. The "National" Team Leader has visibility to all team member's records in this entire organizational chart. 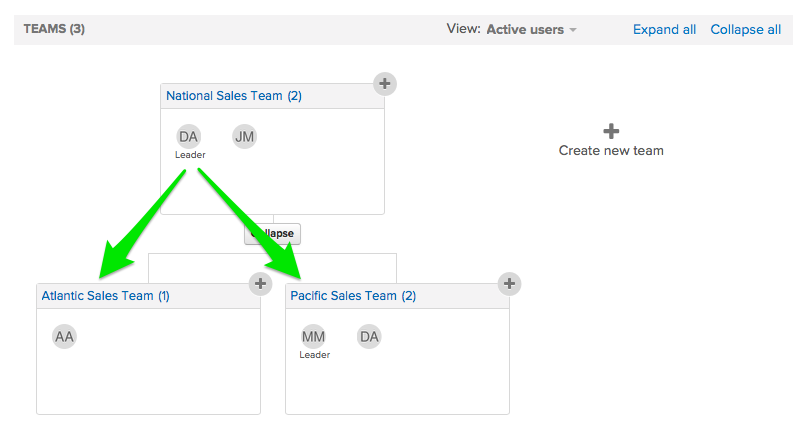 Q: How do I create an organizational hierarchy?
A: Using Reports to when creating or editing in Team Settings allows account administrators to assign team-to-team reporting based on an organization’s structure.

Q: Can teams have multiple Team Leaders?
A: Yes! Account administrators can assign multiple team leaders to a team.

Q: How many teams can I set up in my account?
A: The number of teams available is dependant on the account's subscription. 1 team with Start, 2 on Develop, and an unlimited number of teams on Grow.

Q: Who has access to team data and records?
All visibility settings are set by the account administrator.